View cart “Green Lama Audiobook #6” has been added to your cart.

They called Secret Agent “X”, the Man of the Thousand Faces. Armed with his irresistible gas gun, wearing impenetrable disguises, “X” infiltrates the darkest corners of the Underworld to crush all crime czars!
Black as night, black as hell itself, the “devil-dark” descended upon a fear-crazed populace! Men and women shrieked in agony beneath the lash of bloody, torturing whips. The mangled bodies of innocent children lay in the streets, while human fiends emptied the city of its wealth. And into this chaotic and hideous fog of darkness went Secret Agent “X” to wage a life-and-death battle with unseen criminals.
The enigma of enigmas, Secret Agent “X” has been deputized by a high government official to battle the darkest, most diabolical enemies of America before they sink their poisonous fangs into the nation’s healthy core.

At the end of the Depression year of 1933, tiny Magazine Publishers could see which way the pulp winds were blowing. Street & Smith had broken new ground when they launched The Shadow Magazine in 1931. Doc Savage came two years later. As did The Phantom Detective.

In the Fall of ’33 Popular Publications released both The Spider and G-8 and His Battle Aces. The public was obviously hungry for heroes. And editor Rose Wyn decided that her outfit had to offer one too!

With top writer Paul Chadwick, she brainstormed Secret Agent “X”, uncanny composite of Doc and The Shadow, with a dash of the Phantom thrown in. The first issue appeared at the end of 1933 with a February 1934 cover date. Coincidentally, the popular King Features newspaper strip, Secret Agent X-9, debuted that same month! But for that hyphenated X, lawsuits might have shut down one or the other hero. 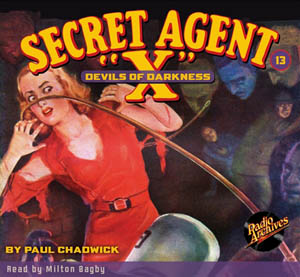