THE MAN WHO DIED TWICE by William E. Barrett
He used death  itself as a pawn in his ruthless game; but the Grim Jaws gaped for him when he baited a trap with virtue.

MURDERER’S LUCK by Robert Leslie Bellem
One word only was whispered at that rendezvous with death, but it lived when the lips were dust and the killer heard it once again.

Spheres of Cathay by Arthur J. Burks
“Crime Don’t Pay” by C. Wiles Hallock
A Bitter Tonic and a Salt by Edward Podolsky
Street of the Devil by Earl W. Scott
Curse of the Jeweled Siva by Allan K. Echols
Protection by Justin Pate
Hoodoo Track by Paul Jennings 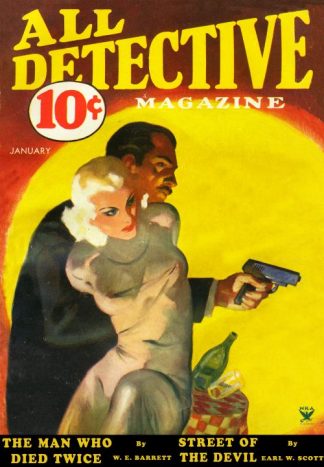