A mental marvel from birth, who used his talents on stage as a boy, Philip Strange is now known as “The Phantom Ace of G-2″ by the Allies during WWI. The German Empire has unleased Hell on Earth! The dead are climbing out of their graves and giant skeletons attack the living. Heads are detonating and soldiers are turning to bronze. But flying to the rescue like an avenging angel is America’s own “Brain Devil,” Captain Philip Strange, the phantom ace of G-2 Intelligence. Whether it’s deadly bridges or killer broadcasts, when the Allies need a miracle they pray for Philip Strange! When World War I gets weird, only America’s own “Phantom Ace of G-2” has a ghost of a chance against the supernatural slaughter. Captain Philip Strange in his strangest cases yet from the pages of Flying Aces magazine!

Take another trip through the imaginings of Donald E. Keyhoe, where the WWI war skies are filled with giant bats, invisible fire, and beautiful spies. And where America turns to its own unnatural secret weapon: Captain Philip Strange. A mental marvel from birth, he was so terrifyingly effective as the Allies’ top agent that the Germans were offering a king’s ransom for his death. This fifth volume of weird WWI adventures collects six stories featuring Germany’s wildest attempts to win the war and Captain Philip Strange’s counter measures! 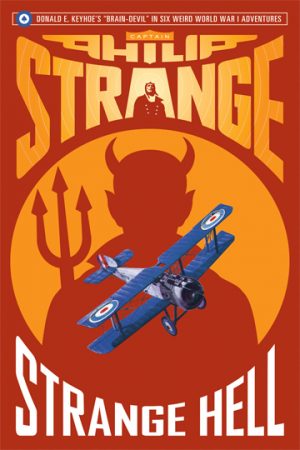