DOC SAVAGE # 6:
The Polar Treasure & Pirate of the Pacific – NEWLY RESTORED EDITION
The legendary pulp superman battles evil in two of his earliest adventures by Lester Dent writing as Kenneth Robeson.  Why does a blind violinist have a map tattooed on his back? Investigating the mystery, Doc Savage and his Iron Crew race to the Arctic icecap in search of the secret of The Polar Treasure, with more than 1,400 never-before-published words restored from Dent’s original manuscript. Then, while returning to New York aboard his new submarine Helldiver, the Man of Bronze is attacked by the Pirate of the Pacific in one of his most violent adventures. This classic pulp reprint showcases the superb pulp cover by Walter Baumhofer that was reused as the cover of the golden age Doc Savage Comics #1, all of Paul Orban’s 1933 interior illustrations from the ultra-rare (and expensive!) fourth and fifth issues of Doc Savage Magazine, and historical commentary by pulp historian Will Murray, author of seven Bantam Doc Savage novels. 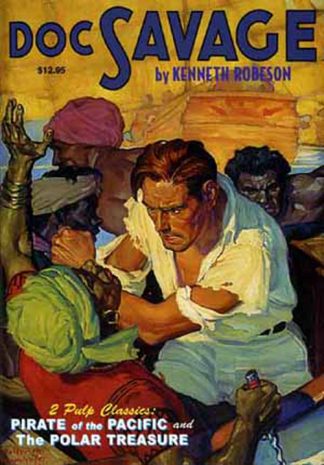