Dusty Ayres—Invasion of the Black Lightning

A steel fist pounded against the gates of Paris, battering to ruin the last stronghold of freedom on the continent. For three long years all Asia and Europe has been a seething inferno of war.

The great wave of destruction makes its sweep westward. Rising up from Central Asia, the Black Lightning invaders, under the command of the mysterious Fire-Eyes, seek to annihilate the civilized world.

Now the path across the Atlantic is open. The United States will be the next to fall unless its troops can rally behind Dusty Ayres, America’s Battle Ace, and stop—the Invasion of the Black Lightning!

For the first time, the initial three novel-length adventures of Dusty Ayres are brought together in one unparalleled volume. Packed with thrills and excitement, this is sure to be the “don’t miss” item of the season!

With an introduction by Tom Roberts.
Cover art by Frederick Blakeslee.

“Dusty Ayres and His Battle Birds” is a trademark and is the property of Argosy Communications, Inc. Used with permission. 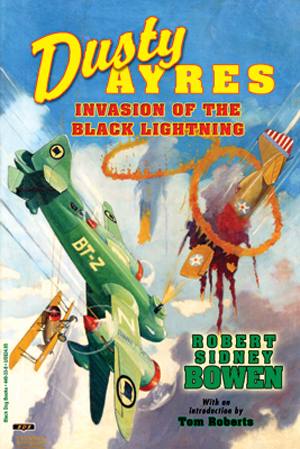 You're viewing: Dusty Ayres—Invasion of the Black Lightning $24.95
Add to cart
0