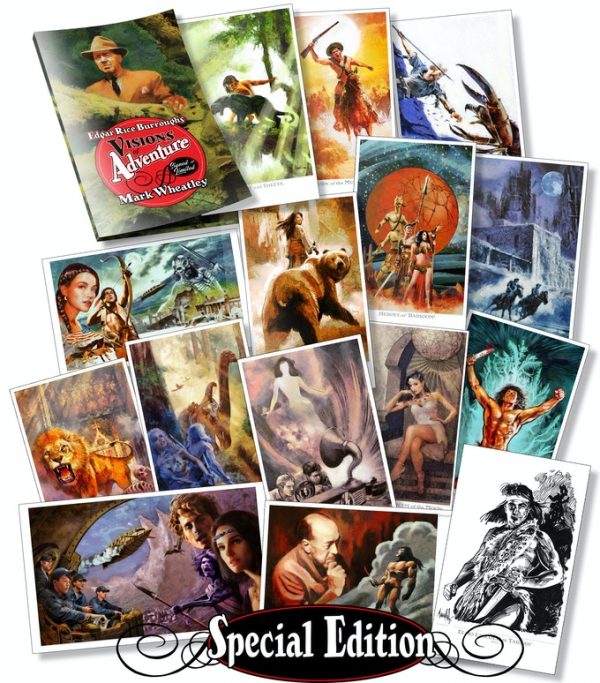 Insight Studios and Mark Wheatley, by arrangement with Edgar Rice Burroughs, Inc., are thrilled to be able to offer Mark’s first Edgar Rice Burroughs VISIONS OF ADVENTURE portfolio, collecting sixteen exceptional paintings that bring-to-life the much-loved creations of the Master of Adventure!

A young Mark Wheatley’s imagination was completely captured by Edgar Rice Burroughs when he discovered a pristine copy of the original TARZAN AND THE JEWELS OF OPARin his grandfather’s book case. Before long Mark was building tree houses and having his own jungle adventures. Years later, after he was already an award-winning artist, he became an illustrator and writer for TARZAN and other popular Edgar Rice Burroughs creations.

In the early 1990s Mark Wheatley became the editor and occasional illustrator of the Tarzan comics. He also wrote the TARZAN THE WARRIOR comic book series that re-introduced the entire cast of characters for a new generation of comic book readers. In the years since, between Mark’s work on his own popular creations, he has illustrated several other Edgar Rice Burroughs creations, including the TARZAN AND THE DARK HEART OF TIME novel by Philip José Farmer and the SWORDS AGAINST THE MOON MEN novel by Christopher Paul Carey, as well as development and design work for Burroughs TV and live stage productions.  His enthusiasm for the worlds of Edgar Rice Burroughs has only grown stronger over the years and the Burroughs fans have awarded him with the Mucker Award and the Golden Lion Award for his many contributions. Now that there is a new wave of exciting creations coming from the Edgar Rice Burroughs company, the time is ripe to present the Edgar Rice Burroughs VISIONS OF ADVENTURE portfolio.