G-8 and His Battle Aces Audiobook #17

Squadron of the Scorpion
by Robert J. Hogan
Read by Nick Santa Maria

They called G-8 the Flying Spy. History never recorded his exploits—and for good reason! No one would ever believe World War I was that wild!
His skin was green, his uniform was a suit of glittering armor and he came — so he said — from Mars. As he thundered through battle skies, only four men knew his strange mission, knew that he was riding a dynamite trail to carry out the most gigantic war scheme ever planned by a death staffel.
Their insignia were signs of the Zodiac… they fought only when ordered by the Stars! Yet G‐8 had a hunch that this apparently superstitious staffel was important, that somehow it was playing death stakes in one of the most deadly war schemes ever laid — and he followed his hunch on a lone daring patrol!
Popular Publications President Harry Steeger and his executive editor, Rogers Terrill, decided to enter the new field of pulp magazines built around a single hero. They enlisted popular aviation fictioneer Robert J. Hogan to help conceive G-8 and his Battle Aces. Steeger and Hogan hashed out an idea. It was part Eddie Rickenbacker and part What Price Glory?
Steeger and Hogan agreed that the new series would soon grow stale of they didn’t spice it up with elements of the fantastic. This recipe ranged from merely super-scientific death rays to unabashedly supernatural manifestations. Nothing was taboo in G-8. Hogan was a pioneer of over-the-top plotting generations before the term was invented.
Before it was all over, G-8 battled weird menaces ranging from Martians to Zombies, with assorted undead minions of the Kaiser sandwiched in between.
Nick Santa Maria brings G-8, Nippy and Bull to thrilling life in their desperate struggle to defeat a nemesis unlike anything they have ever before encountered. Originally published in the February, 1935 issue of G-8 and His Battle Aces magazine.
Nick DeGregorio composed the music for the G-8 and His Battle Aces series of audiobooks.
Chapter 1: Hell’s Twins
Chapter 2: Mud Hazard
Chapter 3: Signs of the Zodiac
Chapter 4: The Zodiac Staffel
Chapter 5: Spy Trap
Chapter 6: Eggs for Heinie
Chapter 7: The Egg Woman
Chapter 8: Eagle Bait
Chapter 9: “To Be Shot at Dawn”
Chapter 10: Satan’s Countersign
Chapter 11: The Dungeon Ace
Chapter 12: S.O.S.
Chapter 13: The Kaiser’s Messenger
Chapter 14: On to Berlin
Chapter 15: Spad No. 7
Chapter 16: The Man From Mars
Chapter 17: The God of War
Chapter 18: The Phantom Army 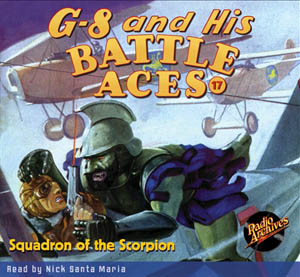