G-8 and His Battle Aces Audiobook #18

Out of war-torn skies soars…G-8 and His Battles Aces! The greatest combat pilot of the War to End All Wars, G-8’s true name was stricken from all official records. Flying a supercharged warplane, backed by his wild wingmen, Bull Martin and Nippy Weston, G-8 fought the most horrific foes the Kaiser could throw at him.
Popular Publications President Harry Steeger and his executive editor, Rogers Terrill, decided to enter the new field of pulp magazines built around a single hero. They enlisted popular aviation fictioneer Robert J. Hogan to help conceive G-8 and his Battle Aces. Steeger and Hogan hashed out an idea. It was part Eddie Rickenbacker and part What Price Glory?
Steeger and Hogan agreed that the new series would soon grow stale of they didn’t spice it up with elements of the fantastic. This recipe ranged from merely super-scientific death rays to unabashedly supernatural manifestations. Nothing was taboo in G-8. Hogan was a pioneer of over-the-top plotting generations before the term was invented.
Before it was all over, G-8 battled weird menaces ranging from Martians to Zombies, with assorted undead minions of the Kaiser sandwiched in between. If Hogan couldn’t concoct a fresh beast-man, why, a clutch of cave men or freshly-defrosted Viking berserkers would keep readers riveted.
The Death Monsters is one of the wildest and weirdest novels in the series’ long run. In this nightmare story, Herr Doktor Krueger, frustrated at being thwarted by the Master Spy time and again, deploys his most diabolical creations yet––the Ulp. What are they? Let’s just say that Krueger may have gotten his inspiration from reading the works of H. P. Lovecraft….
This stupendous audiobook is brought to life by Nick Santa Maria and was originally published in the March, 1935 issue of G-8 and his Battle Aces magazine. Prepare to follow a sky-trail of terror with G-8 and his unflappable wingmen…
Nick DeGregorio composed the music for the G-8 and His Battle Aces series of audiobooks.
Chapter 1: Herr Doktor Krueger
Chapter 2: Secret Agent
Chapter 3: Spy Bait
Chapter 4: Elephant Tracks
Chapter 5: Night Flight
Chapter 6: Death Reaches Down
Chapter 7: Hell Trap
Chapter 8: Captured
Chapter 9: Prison
Chapter 10: The Beast Factory
Chapter 11: The Ulp
Chapter 12: Death of the Ulp
Chapter 13: The Wireless Set
Chapter 14: Escape
Chapter 15: The Ulp Drive
Chapter 16: Ulp Poison 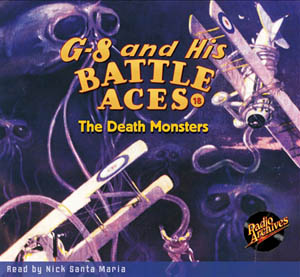