The Clown Who Laughed & The Invisible Enemy
by Kendell Foster Crossen writing as Richard Foster
Read by James C. Lewis

Conceived in 1939 at the behest of the editors of Munsey Publications to compete with the juggernaut that The Shadow had become in print, on radio and in film, The Green Lama was the creation of writer Kendell Foster Crossen, who was asked to conjure up a hero who could lure mystery-minded readers away from The Shadow’s loyal legion of followers.
Inspired by a Columbia University student named Theos Casimir Barnard, who had journeyed to far-off Tibet to plumb the occult mysteries of Lamaism, Crossen concocted millionaire Jethro Dumont, who did the same.
“I was trying to pick a name somewhat like in sound to Lamont Cranston,” Crossen candidly admitted. “You know what I mean, Lamont-Dumont. It was as close as I dared get to Lamont Cranston. A book had just been published about an American who had gone to Tibet and studied and had become a lama, the only white person who ever had at that time. The result was the Green Lama, which the company liked.”
Returning to the States, Dumont assumed an alternative identity of the Buddhist cleric, the Reverend Dr. Pali, then began gathering about him a band of civic-minded citizens to join him in his Buddhistic battle against suffering in all forms—particularly those caused by criminals. And aiding him from the shadows, the mysterious Magga, a woman of many faces who has taken an interest in guiding The Green Lama’s campaign against malefactors.
The Green Lama really gets around in this volume. First, he infiltrates the Big Top for the unusual adventure called The Clown Who Laughed! Then, relocating to the Windy City in time for a major political convention, he goes head-to-head with a Fifth Column scheme to conquer America from within in the exciting Case of the Invisible Enemy!
James C. Lewis returns in the triple role of Jethro Dumont and his emerald-clad aliases, Reverend Dr. Pali and The Green Lama….Om Mani Padme Hum! The Green Lama Knows!
The Case of The Clown Who Laughed
Chapter 1: Death Is Funny
Chapter 2: On the Show
Chapter 3: The Lama Joins the Show
Chapter 4: Making Friends
Chapter 5: Death Goes Calling
Chapter 6: The Gilded Cage
Chapter 7: Murder on a Pass
Chapter 8: An Arrest
Chapter 9: A Trap With Teeth
Chapter 10: The Emissary
Chapter 11: The Schemer
The Case of the Invisible Enemy
Chapter 1: The Murdered Candidate
Chapter 2: The Lama Takes Over
Chapter 3: Visiting Day
Chapter 4: And Sudden Death
Chapter 5: Through Locked Doors
Chapter 6: Perfectly Legal
Chapter 7: A Rescue
Chapter 8: A Reception Committee
Chapter 9: The Scar-Faced Man
Chapter 10: The Return of Jethro 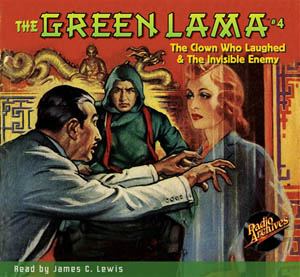