With this seventh Green Lama audiobook, we come to the climax of the original adventures of millionaire Jethro Dumont, who journeyed to the mountains of Tibet and came back on a mission to erase evil from the face of the earth as the first Buddhist superhero, The Green Lama!
The Green Lama often visited tinsel town, which he does once more in The Case of the Hollywood Ghost. Bloody footprints left by no visible being leave a scene of murder, but where will they take the investigation? Only The Green Lama Knows.
Written during a vogue of invisible men movies––Universal released The Invisible Man Returns and The Invisible Woman in 1940––this entry focuses on a similar production, The Man from Nowhere. When the busy set is bedeviled by the imaginary lead villain, an uncatchable killer calling himself the Hollywood Ghost, Jethro Dumont takes a hand in the game in this sequel to his earlier Hollywood triumphs, Babies for Sale and The Wave of Death.
The Case of the Beardless Corpse marked the ultimate Green Lama exploit penned by creator Kendell Foster Crossen writing as Richard Foster. Although Crossen continued his jade-robed hero in comic books and on radio, he never wrote another novelette. But The Lama went out in style, investigating the bizarre circumstances surrounding the slaying of a high-ranking German diplomat––whose face was shaved by his mysterious murderer after death. Working from that baffling clue, The Green Lama follows a trail of blood to a satisfying conclusion, assisted by his surviving circle of followers, which included magician Theodor Harrin and the ever-mysterious Lady from Lhasa, Magga.
James C. Lewis reads the swan song of the strangest pulp superhero ever imagined…Om Mani Padme Hum! The Green Lama Knows!
The Case Of The Hollywood Ghost
Chapter 1: Hollywood Peril
Chapter 2: Business Picks Up
Chapter 3: Harrin Reports
Chapter 4: The Invisible Man Walks Again
Chapter 5: The Green Lama’s Understudy
Chapter 6: On the Spot
Chapter 7: The Net Tightens
Chapter 8: The Boss
Chapter 9: The Fifth Spoke
The Case of the Beardless Corpse
Chapter 1: The Corpse Who Shaved
Chapter 2: The Murdered Consul
Chapter 3: A Secret Exposed
Chapter 4: The Trap
Chapter 5: The Locked Room
Chapter 6: The Rescue
Chapter 7: The End of Pete Barry
Chapter 8: A Fight in the Darkness
Chapter 9: The Beardless Corpse 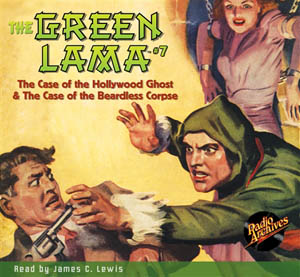