WAR GAME by George Bruce
Death and the agents of a foreign power hover over the U.S. Fleet as the Navy birdmen hold maneuvers in the Pacific Ocean—and a kid in Minnesota picks a mystery message from the air that saves the life of pilot Lars Stewart and averts a war.

O’LEARY’S LAST SUPPER by Arthur Guy Empey
Up from the dead rose the Black Roc, Emperor of the Skies, to groom O’Leary for a cockpit in Hell—and the mighty Mick flashed toward his doom, speeded by the traitor words that swell his Irish heart—”One For All and All For One.”

THE KANSAS COMET by William E. Barrett
He had hit the Hobo Trail at fourteen, had Jerry Malone; he knew boom towns, had raced motocycles and made parachute jumps with a half-mad balloonist. It is no wonder all the beards in France stood straight up with amazement whn Jerry showed Le Commandant how to whip the stick of a Nieuport. 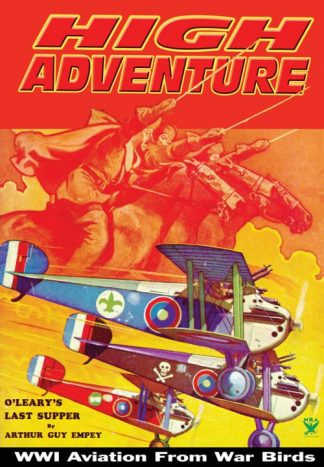