By plague and fire, bribery and chicanery, terrorism and extortion, the insane dictator Ursus Young has established himself as the supreme ruler of America. Who is left with sufficient strength to thwart him? Already he has scattered far and wide the organization of which Operator #5, America’s Secret Service Ace, forms so important a part. Against such tremendous, dictatorial power Jimmy Christopher finds himself battling with a desperation such as he has never felt before…

From out of the pages of Operator #5 magazine steps a dramatic hero who pits himself against threats to national security from all origins. Whether it’s a subversive internal threat, or a full-scale invasion from an enemy land, James Christopher stood ready and resolute to defeat it.

James Christopher did not technically belong to the U. S. Secret Service. He was a top agent for an America’s unnamed Intelligence Service. It was in his blood. His father, John Christopher, retired from the same agency years before. Answerable only to his superior, Z-7, and carrying a letter from the President of the United States identifying him as Operator #5, Jimmy Christopher played for keeps. He carried a rapier sewn into his belt, and in a golden skull hanging from his watch-chain was a reservoir of poison to be taken in the event of capture.

Aided by a small group of trusted assistants, ranging from his twin sister Nan to scrappy street urchin Tim Donovan, Jimmy Christopher was a one-man defense force. Proud and patriotic, expert marksman and swordsman, he is the best America has to offer in a time of severe trial.

Into this unprecedented crisis plunged Jimmy Christopher. Only one man, but a man who embodied the American spirit — and stands prepared to perish to protect his country. His job: to defeat a new invasion of the United States — every month! 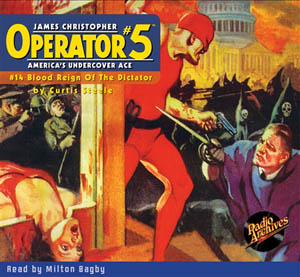