Like the tentacles of a gigantic and loathsome octopus, the ends of that infamous international espionage ring had stretched out across the United States. Lusting for power, the fiendish leader of that ring was stripping the country of its entire armaments; butchering, in the very capital of the nation, the patriots who pleaded for adequate war-strength. Operator #5, America’s Secret Service Ace, tried to oppose that ruthless Death Master — but Jimmy Christopher fought a power that scattered his own helpers, crippled the Intelligence, and threatened invasions that would have spelled utter annihilation!
They called James Christopher Operator #5—undercover agent, man of many identities, patriotic protector of America’s sacred shores. Working for the U. S. Intelligence Service, his job is to root out subversive elements and stand as the first line of defense against foreign invasions from all quarters. Aided by street-smart Tim Donovan and newspaperwoman Diane Elliott, Jimmy Christopher was the James Bond of the 1930s! But can even these resourceful comrades hold the line when the world is filled with ambitious dictators bent on conquering America?
Jimmy belonged to the clean-cut, square-jaw, clear-eyed breed of hero made popular by the F. B. I. back in those grim days. He carried a Colt automatic and wore a flexible rapier concealed in the hollow of his leather belt. A gold skull ornament dangled from a vest-pocket watch chain. It contained a fast-acting poison in case of capture by enemy agents. Jimmy Christopher played a very dangerous game, of which he was a past master. 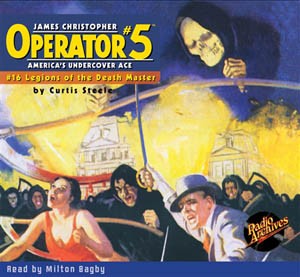