Singapore Nights by Frank Owen
A romantic adventure in the meeting-place of the Orient.
The Man Who Limped by Otis Adelbert Kline
How Hamed the Attar overcame his perverse hatred of women
The White Queen by Francis Hard
A chess-game played for life and death in the Arabian desert
Flower Profiles (Verse} Hung Long Tom
Strange Bedfellows by S. B. H. Hurst
Russian and British interests in Islam—a tale of Bugs Sinnat
The Tiger’s Eye Pearl by Norton Swet
A weird story of Bengal and a disastrous tiger-hunt
Eyes of the Dead by Lieutenant Edgar Gardiner
Mahbub, the Afghan hillman, avenges his kinsman, Yar Khan
The Desert Woman by Richard Kent
A modern Thais comes out of the Great Desert
The Cobra Den by Paul Ernst
Venomous snakes and a wild adventure amo ng the Arabs
The Black Camel by G. G. Pendarves
Buzak f·uled tyrannically in the desert city of El Zoonda
The Curse by Captain Ed Smith
In India it is considered dangerous to insult a Yogi
The Voice of El-Lil by Robert E. Howard
A modern tale of the ancient city of Sumer
The Circle of Illusion by Lottie Lesh
A Japanese tale of the Unfinished Buddha 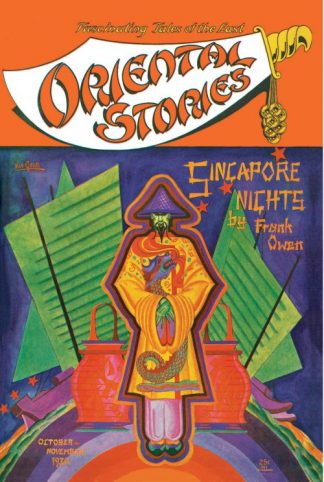