Before Granada’s Walls by Samuel Carson
“A romantic account of the famous siege of Granada”
The Blue Curse by Samuel Taylor
“A fight story”
The Haunted Race Track by Horace Wade
“The story of a thoroughbred”
Thrilling Adventures by Samuel G. Corwin
“True stories of jungle dangers”
Machivelli—Salesman by Henry S. Whitehead
“A story of New York’s Lower East Side”
King of Idaho by Ernest H. Barbour
“Adventures of two-cowboys in foreign lands”
Murder in the Desert by Willian J. Makin
“How crimes are solved on African deserts”
Steel Sharks by Ralph R. Fleming
“A story of submarine warfare on the Adriatic Sea”
The Fool Fetish by Hugh B. Cave
“A story of Borneo” 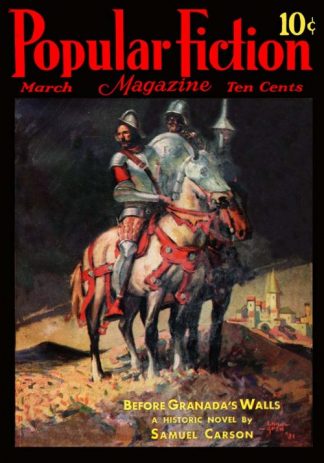