Queen of the Gangsters

Margie Harris was the first woman hardboiled crime fiction writer in history. She wrote some of the toughest, roughest, most remorseless stories to be found in ’30s gangster pulps like Gangland Stories, Racketeer Stories and Mobs. Her avid readers questioned whether she could even be a woman. Who is this “Margie Harris”? they wondered aloud. Who is this frail who cracks wise from the inside?

I’m “just another twist,” she told them—a woman of mystery then—a woman of mystery now. She palled around with the death-row doomed and the Chicago underworld. She may have been a newswoman; may have worked in the law. One point was not in doubt. She slammed her typewriter like a machine gun, mowing down good guys and bad guys alike; shooting them, knifing them, blowing them up—lacing her prose with metaphysical commentary on the destinations of their damned souls.

Tough. Rough. Hardboiled. Through the explosive stories of Margie Harris we savor the meeting of fist and flesh, the clatter of machine guns, the stench of gas fumes from sleek Packards barreling down city streets, the bitterness of bootleg hooch, the glory of sin. A violent symphony of hot jazz.

In an age when gangsters were royalty, Margie Harris was their queen.

This inaugural anthology of her work collects eight explosive stories, an introduction by David Bischoff, and a bio of Margie Harris.

David Bischoff is a New York Times bestselling author, editor and script writer whose credits include the classic fantasy series, The Gaming Magi, and work on Star Trek: The Next Generation. He teaches in an MFA program at Seton Hill University. 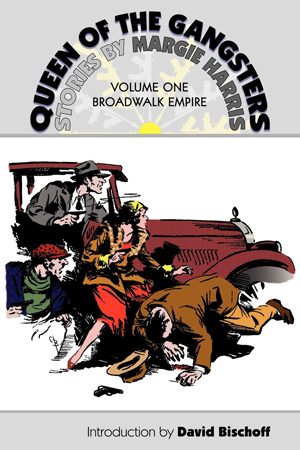