Servants of the Skull
by Emile C. Tepperman writing as Brant House
Read by Milton Bagby

They called Secret Agent “X”, the Man of the Thousand Faces. Armed with his irresistible gas gun, wearing impenetrable disguises, “X” infiltrates the darkest corners of the Underworld to crush all crime czars!
From the macabre maze of a labyrinthian world, the Skull, master of murder, reached out and destroyed the brains of mighty financiers. Money kings were his meat. And the law could not protect them… Only one man could match brains with the sinister Skull—and that man was Secret Agent ”X”. But the Skull did not fear “X.” For “X”—the Man of a Thousand Faces, a thousand personalities, a thousand tricks—had one vulnerable spot. And the Skull knew where it lay.
The enigma of enigmas, Secret Agent “X” has been deputized by a high government official to battle the darkest, most diabolical enemies of America before they sink their poisonous fangs into the nation’s healthy core. Faceless and unsung, “X” infiltrates these threats in a bewildering array of disguises.
A nameless mystery man with a wartime past in the Intelligence service, declared dead by the Department of Justice, and backed by a shadowy group of powerful philanthropists, Secret Agent “X” took on the toughest assignments of the dirty thirties. Operating out of the half-haunted Montgomery Mansion, “X” was also known as the Man of a Thousand Faces. A past master of disguise, he infiltrated the Underworld to crush crime in all of its hideous manifestations.
Follow the Man of a Thousand Faces as he confronts the menace of Servants of the Skull, ripped from the pages of Secret Agent “X” magazine, November 1934 and read with chilling intensity by Milton Bagby.
Chapter 1: Meet the “Skull”
Chapter 2: Exposed
Chapter 3: The Mysterious Mr. Pond
Chapter 4: Road of Peril
Chapter 5: Chamber of Dread
Chapter 6: Devil’s Mission
Chapter 7: The Ming Tong
Chapter 8: Matched Jewels
Chapter 9: Loot for the Skull
Chapter 10: “Alias Secret Agent “X”!”
Chapter 11: Labyrinth of Danger
Chapter 12: The Skull’s Coup
Chapter 13: Doom Trap
Chapter 14: Spider and the Fly
Chapter 15: The Skull Strikes
Chapter 16: Jaws of the Trap
Chapter 17: The Jaws Clamp
Chapter 18: Prisoners of Satan
Chapter 19: The Creeping Death
Chapter 20: Alias the Skull
Chapter 21: Face of the Skull 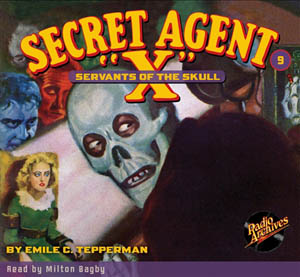