Hand of Horror by Brant House
A metropolis writhed in the clutch of horror’s hand.  The mightest of the mighty fled in stark terror before its groping fiendish fingers. And its wake was a trail of macabre milestones, marking the way with bloated dead.  One man—alone, unaided—followed in that awesome wake.  He saw that enigma of enigmas, that Man of a Thousand Faces—Secret Agent “X.”

Fiend’s Masquerade by Preston Grady
Hoke Martin was a hardened skeptic—until he came face to face with the grisly spectacle that lurked in the black shadows of the storm-lashed island.

The Whispering Corpse by Richard B. Sale
An uneartly cry shattered the unholy gloominess that hung over the slablike chambers of the dead.  It was uncanny—a ghastly rasping slither like the hissing warning of an angry snake.

Tong Torture by Emile C. Tepperman
When Nick Ronson got mixzed up with a Tong revenge gang, it landed as though he’d bought a one-way ticket to hell. 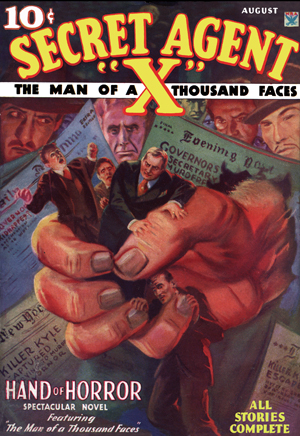