RED DAWN by Lew Merrill
His own countrymen would have none of him, but, though he fought in Saracen armor, he was first of all Anglo Saxon.
LEND ME YOUR EARS by Jose Vaca
They each had a part to play—the dope peddlers, the Kid, and the girl.  Particularly the girl!  She would go to any length to avenge her sister—even though it meant to sacrifice of life and honor.
DEATH RIDES THE DRIVE by Roy Herrick
In the Backwash settlement they made their own laws and they broke them.  And now they were birling logs with a woman as a prize!
Sandakan Shake-Up by Robert Leslie Bellem
Diana Daw by Clayton Maxwell
Sheriff Barbara by Hugh Speer
Cumshaw for the Corpse by James A. Lawson
Tables Turned by Harley L. Court 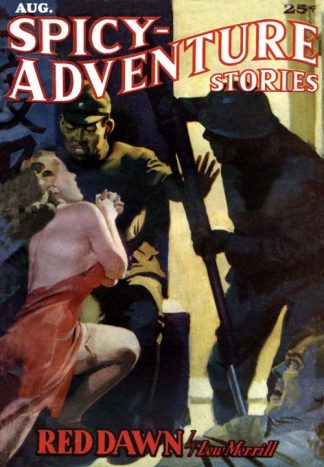