H. P. Lovecraft (1890-1937) was the premier horror writer of his time, and continues to exert an influence on practitioners of that dark art. Most of his work is unified by a common theme–the Cthulhu (kuh-tool-ew) Mythos–in which gods furtively control the fate of mortals, and a mere glimpse of the universe, by nature hostile, is enough to drive a man insane. A number of Lovecraft’s peers borrowed the Mythos for use in their own stories, launching a tradition that continues in our day. This generous volume, commemorating the 50th anniversary of the founding of Arkham House (established to preserve Lovecraft’s work in hardcover), features 22 Mythos stories by Lovecraft and 15 other writers, including the poetic Clark Ashton Smith, the action-oriented Robert E. Howard (creator of Conan the Barbarian), Arkham’s co-founder August Derleth and the youngest of the original circle, Robert Bloch ( Psycho ). Modern writers include Colin Wison, Joanna Russ, Richard Lupoff, Karl Edward Wagner; and Ramsey Campbell, Fritz Leiber and Stephen King, who contribute especially fine work (noticeably absent is T.E.D. Klein). James Turner, who edited the volume, supplies a fine introduction.
Copyright 1990 Reed Business Information, Inc.

From the Inside Flap

“The oldest and strongest emotion of mankind is fear, and the oldest and strongest kind of fear is fear of the unknown.”
–H. P. LOVECRAFT, “Supernatural Horror in Literature”
Howard Phillips Lovecraft forever changed the face of horror, fantasy, and science fiction with a remarkable series of stories as influential as the works of Poe, Tolkien, and Edgar Rice Burroughs. His chilling mythology established a gateway between the known universe and an ancient dimension of otherworldly terror, whose unspeakable denizens and monstrous landscapes–dread Cthulhu, Yog-Sothoth, the Plateau of Leng, the Mountains of Madness–have earned him a permanent place in the history of the macabre.
In Tales of the Cthulhu Mythos, a pantheon of horror and fantasy’s finest authors pay tribute to the master of the macabre with a collection of original stories set in the fearsome Lovecraft tradition:
, The Call of Cthulhu by H. P. Lovecraft: The slumbering monster-gods return to the world of mortals.
, Notebook Found in a Deserted House by Robert Bloch: A lone farmboy chronicles his last stand against a hungering backwoods evil.
, Cold Print by Ramsey Campbell: An avid reader of forbidden books finds a treasure trove of deadly volumes–available for a bloodcurdling price.
, The Freshman by Philip Jose Farmer: A student of the black arts receives an education in horror at notorious Miskatonic University.
PLUS EIGHTEEN MORE SPINE-TINGLING TALES! –This text refers to the Paperback edition. 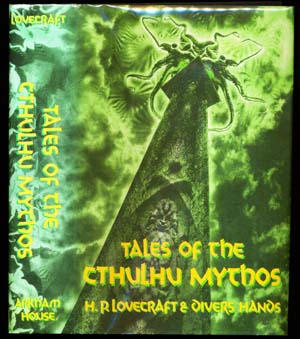