BRAINS OF THE MOB by G.T. Fleming-Roberts
Desire to be a mobster sent little Slink Faggot into the murder maw of the protection racket, with the promise that a gorgeous moll’s body would be his but how can a corpse use a moll?

A MOUTHPIECE SPEAKS NO MORE by Charles Boswell
Far preferable to Yanks Miller was the easy dough that he could get for being mouthpiece of the numbers boss, than was the rough hard grind of being a legitimate lawyer in New York. But blood money attracts death and the white slave gang muscled in on Yanks and his murder mob, to crash that smooth-talking shyster into a flaming holocaust of hell itself! 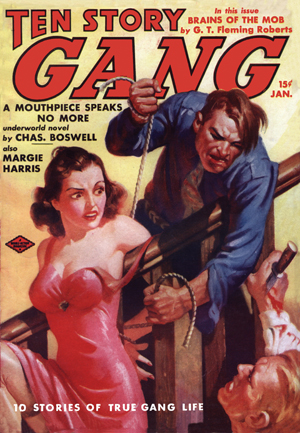