The Garden of TNT

Walking a tightrope of fragile alliances, undercover British Intelligence agent Paul Rodgers, aka the Red Wolf of Arabia, faces off against revolutionaries and foreign dignitaries, trying to sway the balance of power following the Arab revolt.

Drawn from Makin’s personal travels and peppered with intimate color and background, it’s little wonder that the Red Wolf of Arabia stories were reader favorites when they first appeared.

Now collected for the first time in book form are the complete thrilling adventures of the Red Wolf of Arabia—over 500 pages of action and espionage excitement in the shifting sands of international intrigue!

With an introduction by Mike Ashley.

Inspired by the exploits of Thomas E. Lawrence (1888-1935)—El Aurens—Lawrence of Arabia—author and journalist William J. Makin in 1932 created Paul Rodgers, a British Intelligence agent under cover in the Red Sea and Suez region. Makin knew the area firsthand having previously held a news reporter position in the region, as well as penning the travelogue, Red Sea Nights (1933). 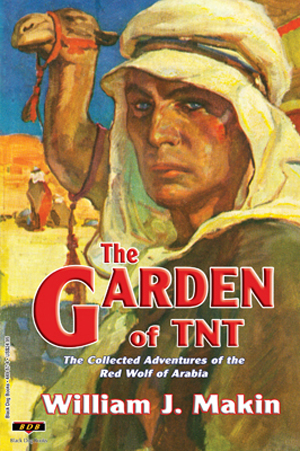