They had all been sentenced to a living death and all bore The Convict Brand! The Jailbirds were recruited from the military prisons of Britain, France, and America. Real men, molded in the harsh fires of life, dishonored perhaps in the eyes of the Army— but men with red blood and courage. Hard fighters, some of them hiding bitter memories, but all of them ready to follow their leader, “Killer” Kirby, down a flaming suicide trail on the most dangerous missions of the Great War! Rather than wither behind bars—they were given the chance to die fighting!

This is the second of two exciting volumes of the collected adventures Donald E. Keyhoe’s Jailbird Flight stories that ran through all three of Popular Publication’s air anthology titles. Starting in Battle Aces in September 1931 running through the end of it’s initial publication run when they switched to Battle Birds at the end of 1932 and into Dare-Devil Acesin 1934.

In August of 1931, Donald E. Keyhoe started three long-lived series in three different aviation magazines: Philip Strange in Flying Aces; The Devil Dog Squadron in Sky Birds; and The Jailbird Flight in Battle Aces. This volume features the first seven Jailbird adventures published by Popular Publications in 1931 and ‘32. A former U.S. Marine pilot, Keyhoe was a prolific contributor to the pulp magazines, but he is perhaps best remembered for his UFO research in the Fifties and Sixties. 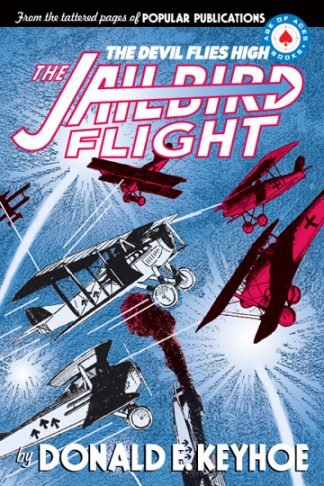 You're viewing: The Jailbird Flight: The Devil Flies High $16.99
Add to cart
0