The Nebula of Death

Earth’s impending passage through a strange cosmic nebula will destroy the ability of all plant life to grow and reproduce, dooming mankind to an agonizing starvation. Standing between life and death for the entire planet are scientist Edwin Allison, stenographer Jeanne Ward, and the brilliant but dangerously eccentric Alexis Vroon, who will be humanity’s savior—or its willing executioner!The Nebula of Death was named by a People’s magazine editor as the most popular serial to ever appeared in that publication. Unfortunately the novel never saw book publication during author George Allan England’s lifetime and has been unavailable for the past nine decades. Black Dog Books is proud to present this thrilling science fantasy adventure to new generations of readers.

With an introduction by Gene Christie.

Praise for England’s Darkness And Dawn

“A novel to stir the blood and the imagination. The author has evolved a stupendous plot.”—Boston Daily Globe 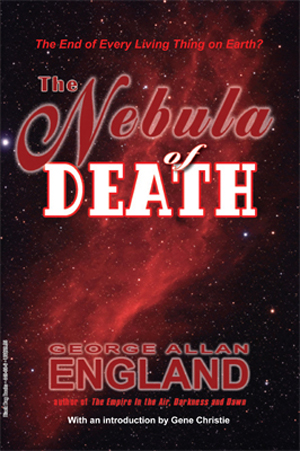