View cart “Captain Future #3 Audiobook” has been added to your cart.

The premise of The Secret 6 was deceptively simple, yet pure pulp. An enigmatic adventurer known only as King busts out of Death Row to form an anti-crime group called The Secret 6. The others include The Key, The Doctor, Shakespeare, The Bishop, and Luga, as well as numerous underworld stool pigeons and hangers-on. All are wanted. So they operate outside the law.
The work of the wildly imaginative Robert J. Hogan, who pitted his World War I flying ace, G-8, against zombies, Martians, defrosted Viking warriors, and other bizarre foes, The Secret 6 battled sinister supervillains, a Mayan Bat-Man, a giant golden alligator and other outrageous menaces. Few pulp series stretched reality as did this four-issue Popular Publications title from 1934-35. There were no limits. That’s what made it a terrific read.
If you wanted to, you could call The Secret 6 “Doc Savage lite”. The series followed a similar template––a group of adventurers pitting themselves against overwhelming threats. The big difference was that the leader, King, was no superman. Like Hogan’s G-8, he was a typical American he-man, not a fearless wonder-worker. King could feel fear, and make mistakes. He was not perfect, therefore the average reader could identify with him, and see himself in King’s shoes.
The third Secret 6 entry shows every indication of having been inspired by the famous Doc Savage novel, The Monsters. The premise is virtually identical––giant creatures are terrorizing the rural population. Authorities are helpless. Only the resourceful Secret 6 team is up to the challenge.
No doubt the inspiration for both of these pulp classics goes back to the 1933 film, King Kong. In The Monster Murders, we encounter ferocious packs of gigantic dogs, 30 foot giants, and other towering nightmare threats to life and liberty.
The Murder Monsters is read by Michael C. Gwynne.
Chapter 1: The Giant Dogs
Chapter 2: Suicide?
Chapter 3: The Seven-foot Man
Chapter 4: Trapped
Chapter 5: “Stick ‘em Up!”
Chapter 6: Two Giants
Chapter 7: Death Trail
Chapter 8: The Unearthly Footprints
Chapter 9: Murder by Pairs
Chapter 10: Path of Slaughter
Chapter 11: Blood Ogre
Chapter 12: The Pointing Flame
Chapter 13: Finger of Hope
Chapter 14: The Giant Calls
Chapter 15: Jailbird
Chapter 16: The Monster Speaks
Chapter 17: King, Police Commissioner!
Chapter 18: “That’s the Man!”
Chapter 19: The Man Monster
Chapter 20: The Giant’s Sweetheart
Chapter 21: Dynamite Wings 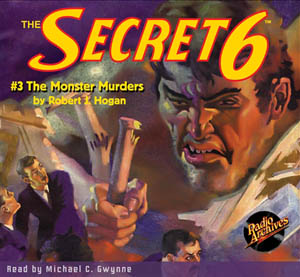