THE WHISPERER # 1:
The Dead Who Talked & The Red Hatchets
He knows no law but Justice! The Gray Wraith deals out bloody vengeance in two hardboiled pulp thrillers by Laurence Donovan writing as Clifford Goodrich, in the most violent series ever published by Street & Smith. In The Dead Who Talked, Police Commissioner James Wildcat Gordon is ordered to bring to justice the sinister super-villain known only as The Whisperer. Then, the Long Arm of the Law becomes ensnared in the crossfire of a bloody tong war between the Underworld and The Red Hatchets. BONUS: From the pages of Crime Busters, the first Norgil the Magician story by The Shadow’s Walter B. Gibson writing as Maxwell Grant. This instant collector’s item showcases the original color covers by legendary illustrator Tom Lovell and Spider cover artist John Newton Howitt, classic interior illustrations by Paul Orban and historical commentary by Will Murray and Anthony Tollin. 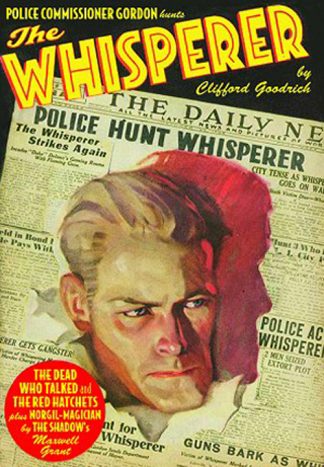