THE WHISPERER # 2:
Six Pyramids of Death & Mansion of the Missing
He knows no law but Justice! The secret life of Police Commissioner James Gordon is revealed in two thrilling novels by Doc Savage ghost Laurence Donovan writing as Clifford Goodrich. First, one by one, the possessors of The Six Pyramids of Death fall victim to a silent killer. Can The Whisperer solve this deadly riddle? Then, when the home of a prominent judge is turned into a house of horror, Wildcat Gordon decides that The Whisperer must return from the dead to haunt The Mansion of the Missing. BONUS: a Norgil the Magician story by The Shadow’s Walter Gibson. This historic collector’s item showcases the original covers by legendary illustrator Tom Lovell and Spider cover artist John Newton Howitt, classic interior illustrations by Paul Orban and historical commentary by Will Murray and Anthony Tollin. 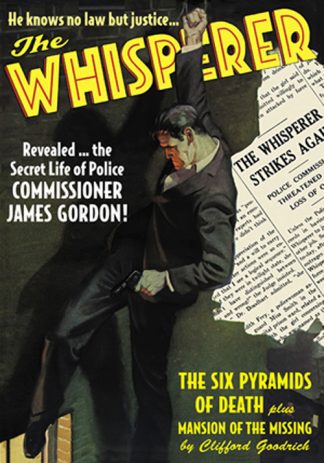