The Lost Planet by Barry Cord
“Join the cosmic hunt for a missing world as a brave band of star-rovers seach space in their quest of the long-forgotten Earth!”

Stranger From the Stars by Frederic Arnold Kummer, Jr.
“Wrecked on an ancient world, spaceman Ylyga Jactor works future magic to escape to his home planet!”

Out of the Years by Ivan Sandrof
The Indestructible by Robert Arthur
The Little Man Who Wasn’t There by Arthur K. Barnes
“James Littleman thought his powers of invisibility were a visible asset—but they made his profits disappear!” 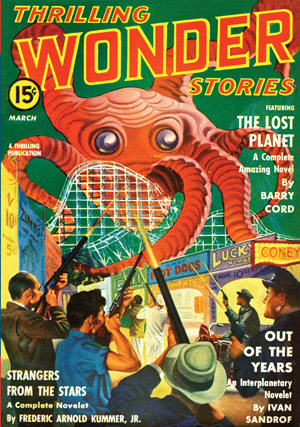