This jumbo-sized Tenth Anniversary Issue boasts something unique in pulpzine history: the reprinting of a complete, book-length (60,000 words) novel in a single issue. The yarn is Francis Lynde’s “B. Typhosus Takes a Hand,” originally published in a 1922 issue of THE POPULAR MAGAZINE. There’s also a history of Chandu the Magician on radio and in film; a lengthy examination of the “New Pulp” publishing phenomenon; a 1940 WRITER’S DIGEST piece by pulp writer Nelson Bond on the importance of snappy starts to manuscripts; a revisiting of science-fictional continuities from the 1940s Superman radio show; a celebration of pulp writer Frederick Nebel’s hardboiled detectives Donahue and Cardigan; a look at the 1914 movie serial THE PERILS OF PAULINE; and a pictorial review of this year’s Windy City Pulp and Paper Expo. Additionally, BNT editor Ed Hulse acknowledges the magazine’s tenth anniversary in a long essay. This special expanded issue of BLOOD ‘N’ THUNDER — containing 162 pages, 50 percent more than an average issue — is illustrated with the usual array of vintage pulp covers and original art, along with rare photos and posters from movies. 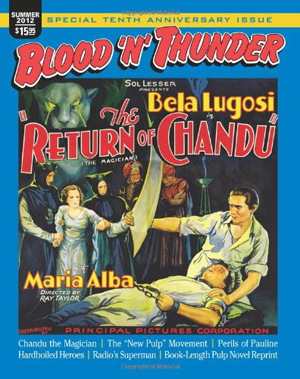