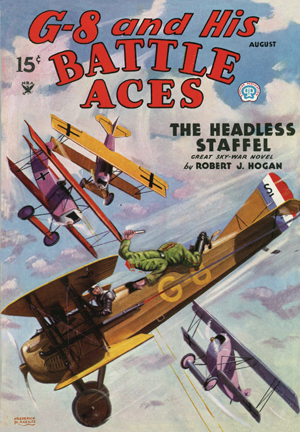 The Headless Staffel by Robert J. Hogan
There is something strange going on here in Germany.  Watch for a new insignia on Fokkers.  I will report more later.  J-7.  But half an hour later J-7 was dead.  What had he suspected?  Against what new danger had he tried to warn the Allies?  There was just one way to find out—G-8 took it, baited a suicide trap with dynamite wings.  And before that night was over he knew he and his battle aces were up against the most deadly menace they had ever faced in fighting skies!