Death Dough by James Perley Hughes
“S-S man Owen Jackson posing as a racket rodman, gets his first orders—and they cult for killing his own S-S partner.”
Framed In Lead by Norman A. Daniels
“Rez Scott found there was no hot-lead limit to his routine when a disapperanence changed into murder.”
Manhunt Heat by Frederick C. Painton
“When County Patrolman Steve Bligh lost his job, he stayed right on the killers’ trail—for he decided he could die just as well out of uniform as in it.”
The Chair Cheaters by K. Krause
Trooper T.N.T. by Charles Alexander
Superstition Snare by Earle Dow
Payoff in Coffins by Lawrence A. Keating
The Morgue Patrol by David M. Norman 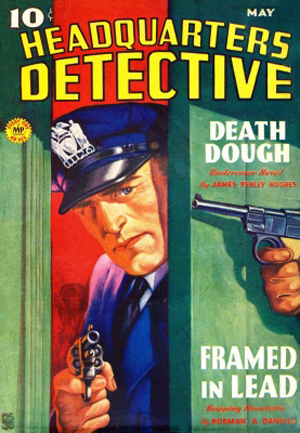