Zomba Has A Thousand Spears by John Peter Drummond
When assegais-wise Masai warriors quailed before the twin-fanged beasts of the Black Vengeance Monster, Ki-Gor knew that captive Helene was doomed to die . . . Unless his lion-thewed strength alone could crush those snarling devil-dogs!

The Golden Claws of Raa by John Peter Drummond
Sam Slater, cobra-eyed merchant of warrior-flesh; Mog, the gorilla with human blood on his dagger-like teeth—and Raa, white queen of the ape legions . . . these were Ki-Gor’s enemies in a battle that only the voodoo  of Fate could decide! 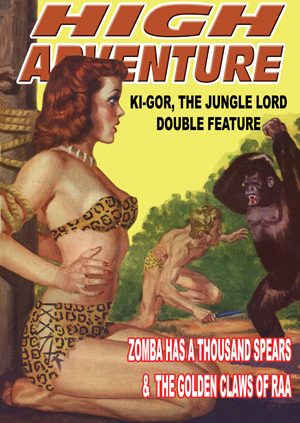