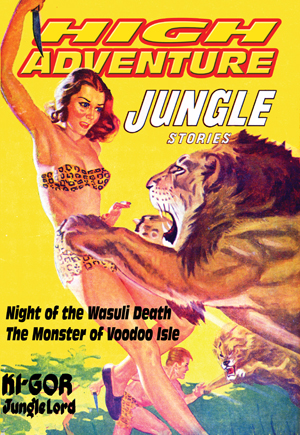 Night of the Wazuli Death by John Peter Drummond – [JUNGLE STORIES SPRING 1952]
Africa was arming for War!  From the Zulu plains to the heart of the Congo they flocked to the blood-red banner of Iban Byzof.  And first to be trapped in that rising tide of revolt was Ki-Gor, son of the jungle, and his bewitching, flame-haired mate, Helene.

The Monster of Voodoo Isle by John Peter Drummond [JUNGLE STORIES FALL 1952]
M’mambo’s painted legions marched white Tabitha, pagan goddess, spurred them to battle fury.  But how could Ki-Gor, White Lord of the Jungle, move against them when his first step meant death to his golden mate, Helene?