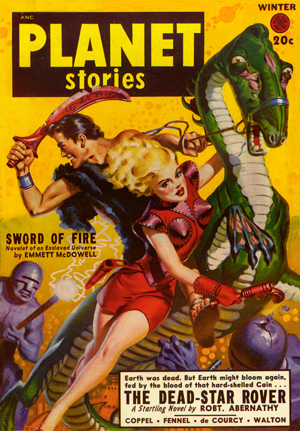 Only savage engine roamed that arid world, charging one another with snarling guns.  And two puny machine-less humans like Torered and Ladna should die quickly beneath those grinding treads.  That they suddenly could instead become the most dangerous things alove must surely be some dead god’s joke.

Sword of Fire by Emmett McDowell

Jupiter Jones naked and helpless in the slime of that vile world, cursed the space warp that had flung him down among its groveling mutants.  For their riding excited whispers proclaimed him a knight in shining armor—the bright weapon in his hand their only hope against the vicious octopods who enslaved them!