“The Kidnapped Midas” by Johnston McCulley
The Thunderbolt shows a stingy skinflint the error of his ways by making him pay his own ransom.
“I’ll Make the Arrest” Charles Boeckman
A police lieutenant assures everyone that he’ll arrest a murder suspect — until the case turns personal ….
“Caverns of Ith” by Basil Wells
Could humans and the race of interior world dwellers co-exist peacefully? It was possible, if they could stand together against a group of raiders …
“Firebrand” by Walt Coburn
That ugly accusation had been branded onto his skin, and he would carry it with him to the grave … but he intended the usher the culprits into the grave ahead of him!
“Working Class Hero” by Richard Lupoff 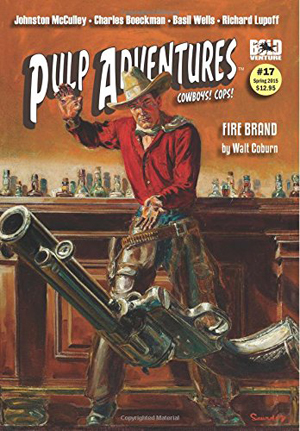