GHOUL’S GAMBLE by Frederick C. Davis
Clayton Kennard was missing, and over the wire came the demand for a hundred grand ransom. Lieutenant Gil McEwen was sure he knew the kidnaper. He promised to send the Moon Man to the chair, promised even while the Moon Man stood at his side in the person of Detective Sergeant Steve Thatcher. Blood stained the floor of a crypt in Sanctuary Cemetery. And beside that blood was a mark of the Moon Man. When McEwen demanded an inspection in the mausoleum murder, Steve Thatcher knew that the dice had been loaded against him in the Ghoul’s Gamble.

THE DIVING DEAD by Lester Dent
The man in black looked like a crow in mourning. He said he was an undertaker—and had a coffin ready for Detective Lee Nace. The police sergeant looked like trouble—went out of his way to make things tough for Lee Nace. The redheaded girl looked like a million. She brought haunted memories to Nace. The corpse in the cabin looked like a horrible nightmare. It plunged Lee Nace into an amazing race with a grim and terrible death. 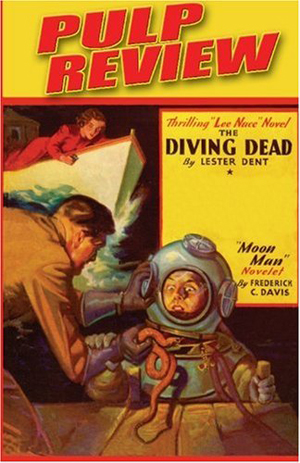