Wings of the Black Death

Pitted against police and the Underworld, the Spider wages a desperate struggle against a foe fiendish enough to use bubonic plague as a weapon! While death-tainted air swirls among the populace bringing death to all it touches, a clever scheme is revealed to strip the nation of wealth and life! Worse yet… is the Spider to blame?

Hundreds of people blinded… and among them, Nita van Sloan, and the Spider himself! The Mysterious Blind Man wields a terrible weapon that robs his victims of their sight, spreading suffering and terror with every step! Betrayed by his loyal retainer Jenkyns, robbed of his vision, how can Richard Wentworth save New York? 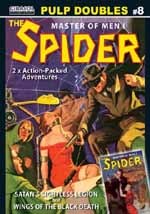