Tarzan: Return To Pal-Ul-Don – Will Murray

Tarzan of the Apes returns in an all-new story written by Will Murray (“Doc Savage”)!

With the African continent engulfed by World War II, John Clayton, Lord Greystoke, abandons his role as Lord of the Jungle in order to combat the spreading Nazi menace.

Flying a P-40 Tomahawk warplane, Clayton is sent on his first mission: to rescue the missing British Military Intelligence officer code-named Ilex. But the daring task plunges him into his savage past after he’s forced down in a lost land that seems hauntingly familiar.

When Tarzan of the Apes returns to the prehistoric realm called Pal-ul-don, he must revert to his most savage persona, that of Tarzan-jad-guru—Tarzan the Terrible! 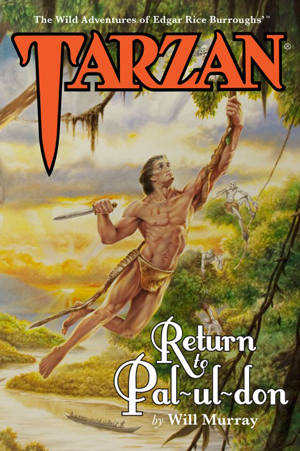