While Death flies the Swastika across the bloody skies of World War II, one American flier stands before the pendulum of history!
In the vivid flames of the European conflict, Bill Combat fearlessly challenges Hitler and his minions. He knows first hand the ruthlessness of the Nazis. For they had already murdered his mother and uncle, and now were after him. But Captain Combat has vowed that when the battle smoke clears, freedom and dignity will reign while Nazi evil shall be banished from the earth!
Age of Aces Books has gathered together all three of Barry Barton’s dynamic and thrilling novels of modern war into one volume for the first time. The Captain Combat stories were originally published bi-monthly from March to August 1940, over a year before America would be thrust into the Second World War. We’ve also included in this volume the original letters pages—”Orders from Headquarters”—from all three issues to give perspective on America’s view on the war in Europe at the time.
Stories include: 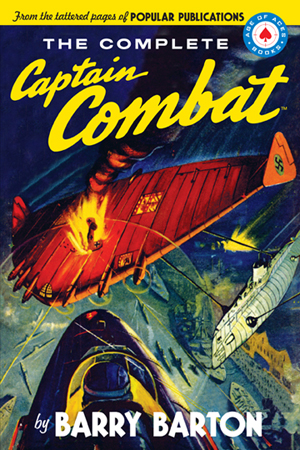 You're viewing: The Complete Captain Combat $16.99
Add to cart
0