To habitués of the nation’s top racetracks he’s known as “The Bland Buddha of the Bangtail Circuit.” Less polite players of the ponies call him a tout or a bookie. There’s no doubt that Mr. Joe Maddox is a shrewd judge of horseflesh, but he’s also a shrewd judge of men. And that’s a critically important quality to possess, because Mr. Maddox repeatedly finds himself pitted against crooks and killers whose depredations are linked in some way to the racing game. Assisted by his sidekick Oscar, the heavyset handicapper has always managed to beat the odds, but sooner or later his luck is bound to change….
The work of prolific pulpster T.T. Flynn, 35 Mr. Maddox novelettes were published in the pages of Dime Detective between 1938 and 1950. Fast-moving and suffused with authentic racing atmosphere, they were among the most popular stories ever to appear in this prestigious crime pulp, second only to the legendary Black Mask in its impact on the genre. 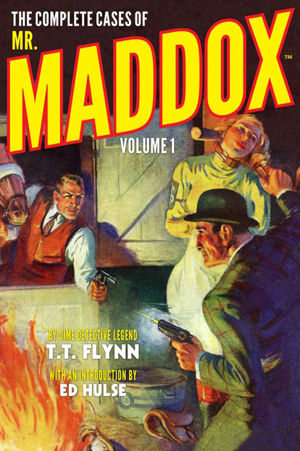