Discount applied: 10% Discount
View cart “The Whistling Wraith” has been added to your cart.

Praise for the work of William Murray Graydon

“A lot of action . . . knew how to build and hold suspense.”
—Mobilereads

Return to a time when the world was not fully mapped, the lure of adventure was strong and Africa was still the Dark Continent.

Journey to the far corners of the globe as Matthew Quin, big game hunter extraordinaire, seeks to capture wildlife for Hamrach & Co. Along the way Quin discovers that vipers, scorpions, tigers and all manner of beasts often walk on Earth in the two-legged variety.

Also included is the novel, In Wildest Africa, in which Quin encounters Teddy Roosevelt on an African Safari!

Assembled and with an introduction by Graydon scholar, Georges T. Dodds, Ph.D.

American-born William Murray Graydon (1864-1946) was an extremely prolific and popular author of adventure fiction for more than three decades. His writing has been cited as an influence upon the creation of Tarzan by Edgar Rice Burroughs. One online source states that Graydon, after moving to England, wrote “more than 100 Sexton Blake stories for the Union Jack and an equal number for the Sexton Blake Library; some of the former were later used as the basis for ‘Nick Carter’ stories published by Street and Smith.”

His fiction is easy flowing, action packed and highly enjoyable. 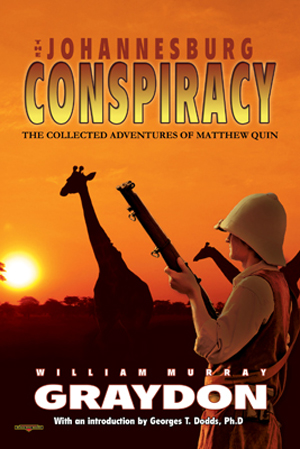 You're viewing: The Johannesburg Conspiracy $19.95
Add to cart
1