The Three Mosquitoes: The X-Gun Flight

The famous and inseparable Three Mosquitoes were the mightiest flying combination that had ever blazed its way through overwhelming odds and laughed to tell of it! Flying in their customary V formation: at point was Captain Kirby, impetuous young leader of the great trio; to his right was Lieutenant “Shorty” Carn, the mild-eyed, corpulent little Mosquito; and lanky Lieutenant Travis, eldest and wisest of the Mosquitoes to his left! With their customary battle cry— “Let’s go!”— they’re off on another dangerous mission in perilous skies!

Ralph Oppenheim’s Three Mosquitoes was one of the longest running aviation series to never have its own magazine. They flew for twelve years, through nine different magazines in over five dozen stories! This thrilling volume collects a quartet of 1932 adventures from the pages of Popular Publications’ Battle Aces. 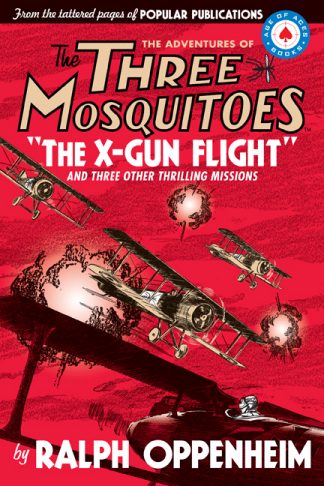