Robots, Dwarfs and Death Rays were no match for The Squadron of Forgotten Men. Dick Traine, Monte Prince and the rest of this “Vanished Legion” of living ghosts were on call for only the strangest and most perilous missions of the war. Officially listed as “Killed in Action,” their continued existence was unknown to all but a few of the High Command. Operating out of a secret base in the Vosges Mountains, there would be no reprieve—only death would free them from their unkind fate!

The seven tales of “The Vanished Legion” originally appeared in Dare-Devil Acesmagazine in the early Thirties and were penned by Donald E. Keyhoe. A former U.S. Marine pilot, Keyhoe was a prolific contributor to the pulp magazines. Even though he blazed a path for G-8 with his Philip Strange stories in Flying Aces, he is perhaps best remembered for his UFO research in the Fifties and Sixties. 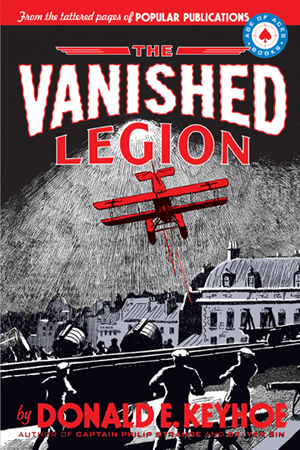