Macabre is defined as “dwelling on the gruesome” and “tending to produce horror in the beholder.” It is also defined as “having death as a subject, comprising of or including a personalized representation of death.” Represented here are magazines dealing with horror, terror, suspense, supernatural, occult, weird menace, bizarre, and off-trail stories and articles. The choice of these titles has been governed in part by their rarity. All the titles in this collection are scarce and difficult to locate. Many of these titles are not to be found in libraries and private collections. Deliberately includes magazines that had short runs and thus tended to be little known and scarce, including some of the rarest and best magazines in this genre such as The Thrill Book, Tales of Magic and Mystery, Strange Tales, Mind Magic, Mystic Magazine, and True Mystic Science. Stories are classified according to length as short stories, novelettes, novels, or serials. Non-fiction has been classified as articles, features or series. Poetry has also been included in the index. The publisher, editor, and artists have been identified whenever possible. Complete checklists of all issues published, with dates and volume numbers are given. This book mainly consists of an alphabetical index by authors, with stories and articles listed in chronological order, under title published. 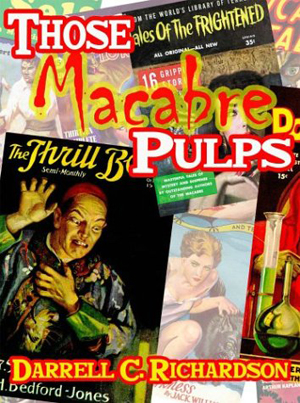 You're viewing: Those Macabre Pulps $22.00
Add to cart