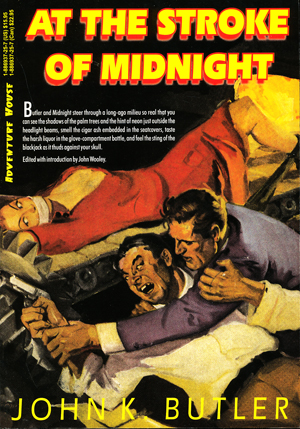 At the Stroke of Midnight

Advance Praise – “At the Stroke of Midnight is a must for the library of any pulp aficionado and anyone who admires a good, old-fashioned, atmospheric detective stories.” –Bill Pronzini, author of BLUE LONESOME, HARDCASE, ILLUSTIONS and more.”Cruising the foggy night streets of Los Angeles in his Red Owl taxi, dodging blondes, bruisers, and bullets in a series of rapid-fire, fast-paced novelettes from the 1940s, his complete adventures are gathered her between book covers for the first time. This is one cab ride you won’t want to miss!” –William F. Nolan, author of LOGAN’S RUN and THE BLACK MASK BOYS.

Introducing Steve Midnight, hacker extraordinary for the Red Owl Cab Company, and his amazing fare, Zohar the Great. Steve had seen Zohar work his magic on a three-a-day vaudeville circuits, but the turbaned mystic had never bamboozled him so thoroughly from the stage as he did the ndight he produced a blond corpse instead of the customary rabbits from his gimmick coffin right in the back seat of Steve’s own hack.

In the 1930s and ’40s, he wrote about the otherworldly landscape of Southern California with a tough elegance themes bordered on poetry, driving his tarnished but noble knight through a neon-lit neverland. After a few years, a call from Hollywood sprung him from the pulpwood pages of the detective-fiction magazines and onto a movie lot, where he began crafting features that would light up the screens during Tinsletown’s golden age. It wasn’t Raymond Chandler. It was Chandler’s compadre from the pages of Black Mask and Dime Detective magazines, John K. Butler, whose star shone as brightly as Chandler’s in the pages of the pulps. Chandler went on to movies and best-selling novels; Butler stayed in the picture business, his work never reaching book form. Until now.

You're viewing: At the Stroke of Midnight $15.95
Add to cart