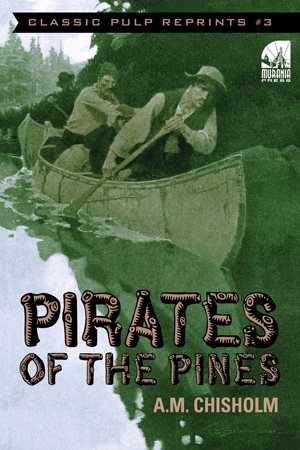 Pirates of the Pines

Originally published in the October 20, 1915 issue of Street & Smith’s POPULAR MAGAZINE as ﾓFur Pirates,ﾔ this rousing adventure yarn is set in the wilderness fringing northwestern Canadaﾒs great Carcajou River. It features as protagonist and narrator the 18-year-old Bob Cory, who lives with his sister Peggy on their uncleﾒs modest homestead. While out one day with Jim Dunleath, an invalid who has gone north to recover his health, Bob unearths a buried letter written by notorious fur thief Angus McNab to his brother, revealing the location of a fortune in stolen pelts cached on one of the small islands that dot the nearby Burntwood Lakes. Since the 20-year-old missive never reached its intended recipient, Dunleath reasons that the treasure must still be in its hiding place. He confides in a wealthy Eastern sportsman named Fothergill, who agrees to bankroll an expedition to find the cache. Itﾒs giving away no secret to report that Chisholm, quite deliberately, appropriated the characters, plot structure, and narrative tone of TREASURE ISLAND. (POPULAR’s editor Charles Agnew MacLean hinted as much in his introductory blurb to the story.) Nearly every element in ﾓFur Piratesﾔ corresponds to one in Robert Louis Stevensonﾒs classic tale. And yet, Chisholmﾒs yarn is no slavish imitation. Itﾒs a brilliantly executed pastiche, a genuine tour de force. Even though the characters are modeled on easily identifiable figures from TREASURE ISLAND, they have personalities all their own. The settings are vividly described and the yarn is suffused with verisimilitude. The story works magnificently on its own terms; you donﾒt have to be familiar with Stevenson’s immortal classic to appreciate Chisholm’s exhilarating homage. But if you are, well, thatﾒll just enhance the experience.