A mental marvel from birth, who used his talents on stage as a boy, Philip Strange is now known as “The Phantom Ace of G-2″ by the Allies during WWI. There are a hundred ways to die in battle, but that won’t stop Germany from devising newer and crazier methods. If it’s face-melting plagues, swords of light from the sky, rivers of blood or killer fog, only one man in G-2 Intelligence has the uncanny abilities needed to cheat these new kinds of unnatural death: Captain Philip Strange, the Brain-Devil! Whether fighting Allied traitors or a medieval executioner, when death gets strange, Strange comes alive! Thrill to eight of the strangest cases yet from the pages of Flying Aces magazine!

wTake another trip through the imaginings of Donald E. Keyhoe, where the WWI war skies are filled with giant bats, invisible fire, and beautiful spies. And where America turns to its own unnatural secret weapon: Captain Philip Strange. A mental marvel from birth, he was so terrifyingly effective as the Allies’ top agent that the Germans were offering a king’s ransom for his death. This fifth volume of weird WWI adventures collects six stories featuring Germany’s wildest attempts to win the war and Captain Philip Strange’s counter measures! 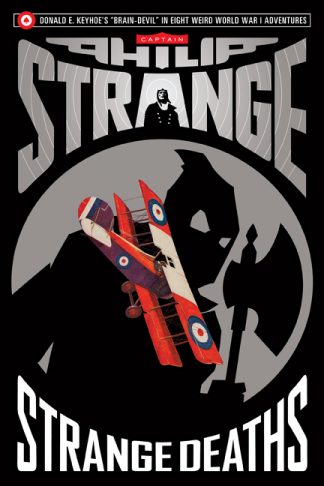