They were STRANGE ENEMIES!
Once they were just two young lovers, pledging their devotion in a Mecklenberg garden. Now they are reluctant rivals enmeshed in the biggest conflict the world has ever seen. While the Great War had forged him into the so-called Brain-Devil, America’s top agent, she had become the famous Fraulein Doktor, Germany’s most alluring and elusive spy. When love and loyalty collide in eight epic tales of WWI aviation and intrigue, the bullets—and the sparks—are going to fly.

Take another trip through the imaginings of Donald E. Keyhoe, where the WWI war skies are filled with giant bats, invisible fire, and beautiful spies. And where America turns to its own unnatural secret weapon: Captain Philip Strange. A mental marvel from birth, he was so terrifyingly effective as the Allies’ top agent that the Germans were offering a king’s ransom for his death. Our second volume of weird WWI adventures collects the eight stories featuring Captain Philip Strange’s pre-war love Karol von Marlow, now the famous Fraulein Doktor, Germany’s loveliest and most elusive spy! 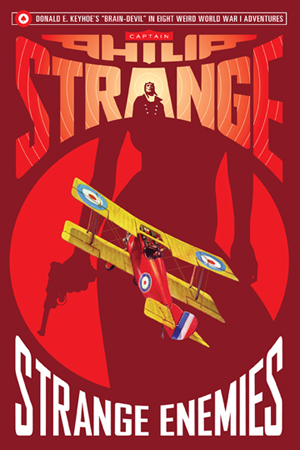