DOC SAVAGE  # 3:
Death in Silver & The Golden Peril
America’s first superhero returns in two of his greatest adventures. In Death in Silver, ruthless terrorists launch a series of attacks that leave Manhattan in flames. The Man of Bronze, his Iron Crew and Doc’s beautiful cousin Patricia Savage must unmask the leader of the Silver Death’s-Heads before they achieve their murderous goals, in an epic tale by Lester Dent writing as Kenneth Robeson. Then an international band of mercenaries invades the Republic of Hidalgo to usurp the source of D oc’s secret wealth in the sequel to the first Doc Savage novel. These thrilling adventures are reproduced with the original pulp covers by Walter Baumhofer and Robert Harris, interior illustrations by Paul Orban and historical commentary by Will Murray. 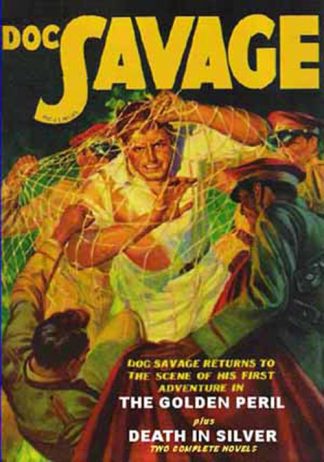