G-8 and His Battle Aces Audiobook #58

Fangs of the Serpent
by Robert J. Hogan
Read by Nick Santa Maria

G-8 and His Battle Aces ran for 10 wild years. And every single G-8 sky saga was written by Robert J. Hogan. This was a rare thing back in the pulp magazine days, where the authors often wrote under house names and sometimes shared those bylines with other contributors. Naturally, telling the exploits of a high-flying hero such as the Master Spy every month without fail was a relentless and demanding gig. So it stands to reason that G-8 had his highs and his lows.
One of the highs was the series’ premiere novel, The Bat Staffel. In an effort to hold the readers’ interest and keep from going stale, Hogan wrote dramatic G-8s such as The Blizzard Staffel, weird G-8s—Squadron of the Scorpion and The Death Monsters come to mind—and one-of-a-kind G-8 novels that fit into no convenient category.
Fangs of the Serpent introduced the villain of the title, the serpentine war cripple with the power of super hypnosis. This was no ordinary antagonist—not that any foe of G-8 was particularly ordinary—but the combination of this strange mesmerizing enemy agent, and the change-of-pace story, makes this one of the standout G-8 novels of the entire 1930s.
In this uncanny epic, the Flying Spy faces a challenge that tests his courage to the utmost. For his opponent this time is not a rival ace, nor a mad scientist, but an occult entity able to bend others to his malign will, one who twists and poisons both sides of the global conflict. Once the Serpent has G-8 in his power, escape seems impossible, victory remote and unattainable.
Strangely, Hogan never brought the Serpent back for an encore bout. Perhaps he was just too creepy even for G-8 and His Battle Aces magazine.
Once again, Nick Santa Maria brings G-8, Nippy and Bull to thrilling life in their desperate struggle to defeat a reptilian nemesis unlike anything they have ever before encountered. Originally published in the July, 1938 issue of G-8 and His Battle Aces magazine.
Nick DeGregorio composed the music for the G-8 and His Battle Aces series of audiobooks.
Chapter 1: The Serpent Appears
Chapter 2: The Strange Death of General Gordon
Chapter 3: Death Walks Alone
Chapter 4: The Serpent in Action
Chapter 5: A Strange Story
Chapter 6: The Serpent Strikes
Chapter 7: Lair of the Serpent
Chapter 8: The Chief Goes Mad
Chapter 9: The Battle at Dawn
Chapter 10: Aces Die Hard
Chapter 11: Grounded Buzzards
Chapter 12: Loaded Dice
Chapter 13: Fangs of the Serpent
Chapter 14: Failure
Chapter 15: An Ace Rides the Sky
Chapter 16: Make Way for Death
Chapter 17: The Trail of the Serpent
Chapter 18: Aces Must Die 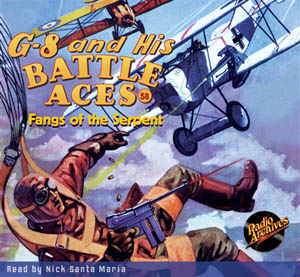